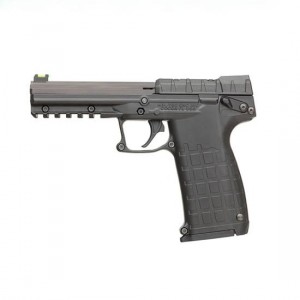 Kel-Tec claims they’ve shipped their newest gun, the PMR-30. I’ve been eagerly awaiting my own since ordering it back in April. I’ve been checking regularly with my local gun dealer – so far my pistol hasn’t come in yet.

I’ve long had a passion for .22 WMR autoloading pistols. Many people will argue that, if you want a .22 magnum pistol, you’re better off picking up an inexpensive and reliable revolver. Rimfire revolvers have been around for well over 100 years, and the technology is well refined. But there’s something to be said about having 10, 20, or even 30 round at your disposal without the need to reload.

A number of years ago I picked up an old AMT Automag II in fair condition. Long and lean, it looked like a cross between a 1911 and a Beretta 92 that had been crafted from shiny stainless steel. One of the first magnum autoloaders ever developed, it had a number of problems. Extraction issues caused by the late peak pressure of the .22 magnum load were ingeniously solved by engineers who had a number of tiny ports drilled at 90 degree angles into the chamber.

Later I came across an old Grendel P-30 in fair condition. It was an interesting pistol, but prone to feeding problems. Fun to shoot (when it would cycle), it looked like something out of Blade Runner. Unlike the AMT Automag II, I was never able to get my Grendel to cycle properly, despite the amount of money I gave my gunsmith.

Imagine then my excitement when FN Herstal came out with their Five seveN pistol, appropriately named given the 5.7x28mm cartridge it fired. The Five seveN boasted a 20 round magazine capacity and slightly better ballistic performance than the .22 magnum. It was also supremely reliable, though at a very high price. It wasn’t just the pistol that was expensive, retailing for more than $1,000. Ammunition, initially only available through FN, was priced over $0.50 per round. Of course I bought one anyway and still have it, though I don’t shoot it as often as I’d like to owing to the high cost of keeping it fed.

So when Kel-Tec, under the direction of George Kellgren the original designer of the Grendel P-30, announced that they were developing a .22 magnum autoloader it piqued my interest. So far however, Kel-Tec has been long on promises and short on delivery. Initial promises of an April delivery date soon became May and then June. Finally in July Kel-Tec announced that they had shipped their first delivery of PMR-30s. It’s August now, and no one can seem to find them yet.

I’ve got my ears to the ground and am eagerly looking for my own model, but so far haven’t found any dealers or distributors who have any. As soon as I find one however, you’ll find the review here.