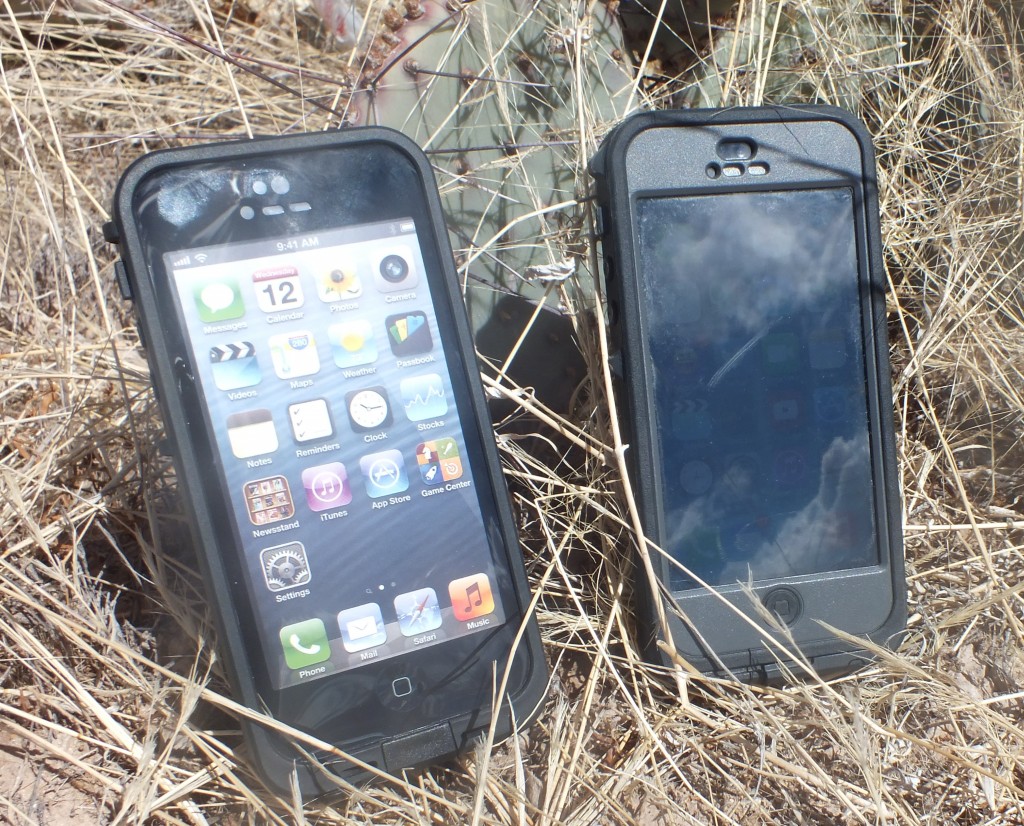 A cellphone is no longer just a phone. Over the years the lowly cellphone has morphed into the enormously powerful computing device we call the smartphone, and they’re everywhere. Hunters use them for GPS navigation, range finding, and even as an electronic game call. Competitive shooters use shot clock apps. Police use them to run biometrics and background checks. There are even specialized military roles for both iOS and Android based devices.

The environments in which we use them are rough and unforgiving. Smartphones themselves are rather delicate by comparison. When exposed to the elements they quickly succumb. As they became more popular people naturally began seeking out ways to protect their investment.

The Facts
Two of the largest and most popular manufacturers of cases for smartphones and tablets are LifeProof and OtterBox. Based out of Fort Collins, OtterBox has been manufacturing protective cases for smartphones since founder Curt Richardson launched the company in 1998. Founded in 2009 by Australian Gary Rayner and based out of San Diego, LifeProof is a more recent entry into the smartpone case race than OtterBox. They first released their product to market in 2011 to great fanfare, and amid protests from OtterBox.

LifeProof’s entry into the market prompted OtterBox to file a lawsuit against them that alleged that many of the design aspects infringed on their patents. That lawsuit came to an end in May of 2013 when LifeProof was aquired as a sister-company to OtterBox. The terms of the acquisition have not been made public, but each company’s products remain separate and distinct from the other.

For the purposes of our ‘shootout’ we acquired comparable cases from each company: The LifeProof fre, and the OtterBox Preserver. Testing consisted of daily use by my wife and myself for a week, after which we switched cases and continued the test for another week. This switching back and forth would hopefully eliminate any differences in our personal treatment in our phones. Following these two weeks, we subjected the phones to a drop test, a 10-minute immersion in water, and a dust test, followed by a trip to the range to see how both functioned when using our iPhones as shot timers.

Each case is rated for use up to 6.6 feet (2 meters) underwater, offers drop protection (MIL STD 810F-516) of the same distance, boasts an IP-6x rating against dust, and has a scratch-resistant screen cover.

The similarities between the two cases ends there. Close examination is not required to see that the two companies took different approaches in their case design and intended role. The OtterBox is significantly heavier and bulkier than the LifeProof case. It also provides additional protection in the form of a memory foam pad that provides a cushion behind the phone. The LifeProof has superior water resistance and functionality in a case that is both thinner and lighter than the OtterBox.

The LifeProof fre came with a water and dust-proof audio jack that allows headphones to be used while the phone remains protected from dirt and moisture. Waterproof earbuds are even available so that you can listen to your workout mix while swimming. By contrast the OtterBox requires that the o-ring sealed hatch covering the audio port remain open when using headphones.

Both cases provided adequate protection in the three tests we conducted. A 2 meter drop onto concrete can create forces in excess of 10-Gs, but we noted no visible damage to the phones and no perceptible changes in performance. The water immersion was a bit exciting, as the phones initially gave off a stream of bubbles when they were dunked. This turned out to be nothing more than various nooks and crannies in the case yielding to the water pressure: the insides of the cases were kept bone dry throughout the test.

For the dust test, not having a talcum chamber, we took the phones offroading in a Jeep TJ with the top down through the high deserts of New Mexico. Both cases performed well here also, though the OtterBox was more difficult to clean. We settled on rinsing it off with water, which did an adequate job.

LifeProof also claims their case provides protection against snow. Now, to be honest, I’m not sure how much of a difference snow would make when the phone case is already waterproof to 2-meters, but I do like to ski. In the interest of science we took the phones on a trip to Ski Apache near Ruidoso, New Mexico, and dropped them in some deep powder a couple of times. I also made some runs down the mountain using LifeProof’s waterproof audio jack and my regular iPhone earbuds. We did not see that the phones were affected in any way.

Finally, we hit the range for the shot timer test. One of the drawbacks of having a case for your smartphone is that the audio quality is affected. This means that it can be harder to hear a person on the phone, and make it harder for them to hear you, because of the membranes that are used to keep the interior of the case dry and dust-free. We didn’t have much information on the OtterBox’s membranes, but LifeProof touts their Sound Enhancement System which is supposed to allow for full transmission of sound through the case.

The Shot Timer iOS app from Innovative Applications served as our test bed, and I shot a Para Ordnance P14.45 using Federal’s American Eagle brand of 230 grain FMJ ammunition. For each test I shot an El Presidente drill. My wife and assistant for these tests stood behind me to record each string. I’m not disclosing my times, because frankly they sucked and we’re testing the phone cases and not myself. In both cases, the timer worked well and was able to pick up each shot without fail.

What We Like
The cases work as advertised. Both provide adequate drop protection and are totally waterproof when installed using the provided instructions. Even though we didn’t have a test chamber to verify the IP-6x ratings of the cases, they still performed in what were /very/ dusty conditions out in the desert.

We especially liked the ability to use the LifeProof while listening to music underwater. This isn’t something that would necessarily get a lot of use, but it is pretty nifty nonetheless.

The OtterBox is just plain tough. It weighs nearly four times as much as the LifeProof case and you can feel the additional heft in it when you first hold it, Though it’s hard to measure, it seems to provide much more overall protection. The addition of a memory foam pad in the OtterBox works well to hold the phone in place, and we feel it adds at least a little extra protection from impacts. 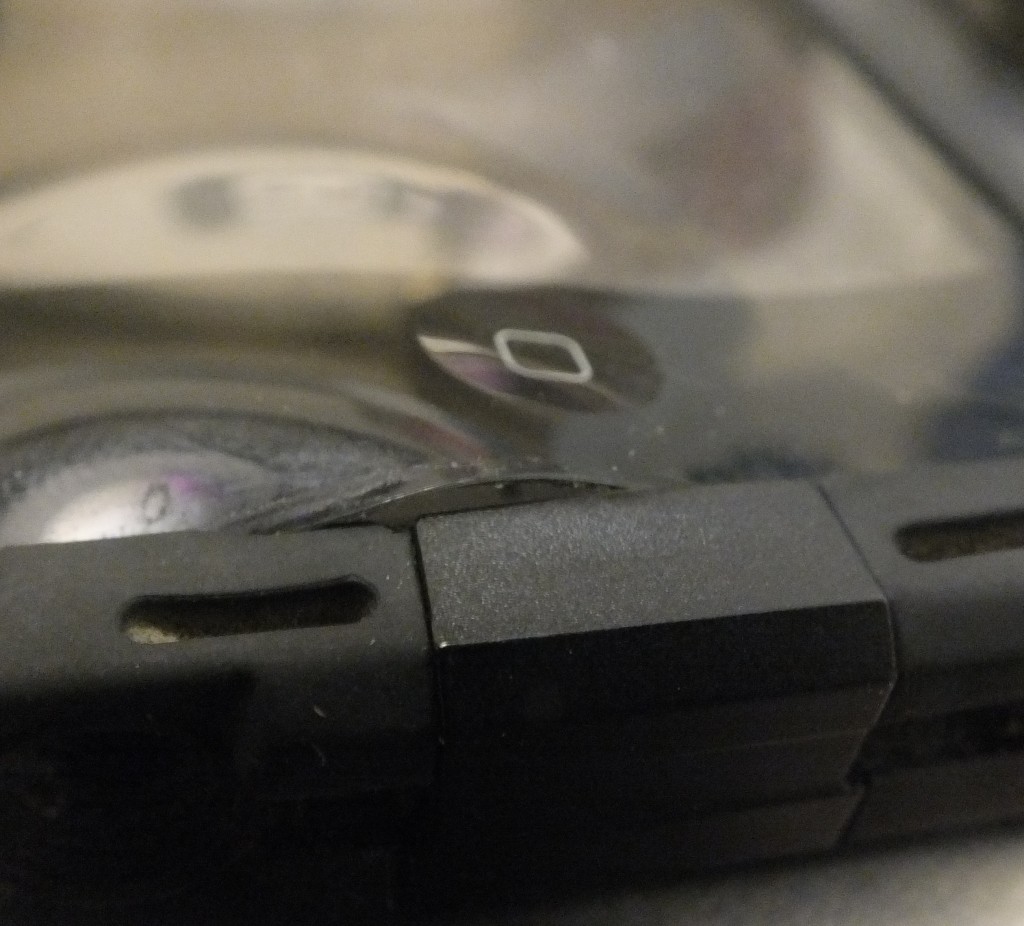 The LifeProof case did get one additional, although inadvertent, test that the OtterBox did not when I forgot my iPhone in my pants pocket before running the pair through the laundry. Oops. The LifeProof case protected my iPhone through the wash and spin-cycle just fine, and was luckily discovered before being dumped into the dryer.
Could this incident have led to the failure of the screen protector? We can’t say for sure, but it’s certain that this is one test that the OtterBox was not forced to endure.

What We Don’t Like
One weak point that we were able to find affected both cases, though in different ways. We were never able to get the mute switch on the case of OtterBox to work reliably. By contrast, the LifeProof mute switch worked well, but after the week that I was using it the membrane covering the toggle failed completely.

The lightweight construction of the LifeProof case did seem to be the cause of one other point of failure. After being accidentally run through the laundry machine, the plastic screen cover began to come away from the tough plastic outer shell. It should be noted that LifeProof does not guarantee survival through the spin cycle, but the phone still made it out without a scratch or drop of water.

Finally, the OtterBox simply did not have the level of functionality that the LifeProof case provided. It’s completely waterproof, but only provided that you don’t open the hatches at the bottom. They work well when closed, but when we took the phones skiing we couldn’t use the earbuds with the OtterBox because to do so would expose the phone to snow and the moisture that comes with it.

The Verdict
In our shootout we have to give the nod to the OtterBox. It wins, but only by a nose. The LifeProof is slimmer, weighs less, and has more responsive controls. Additionally it offers more versatility in wet conditions with the waterproof audio jack adapter included with every case. Were it to be used in “normal” day-to-day activities we have no doubt that it would protect your smartphone just fine. The OtterBox however feels much more robust and able to withstand the extremes of the outdoors. While it weighs more and is bulkier than the LifeProof case, we feel it provides a slight edge in protection overall.

The failure of the screen protector on the LifeProof really was the incident that caused us to give the OtterBox the edge, but don’t let that dissuade you from choosing the LifeProof if it suits your needs.

Accessories
Both smartphone cases are available with various accessories, although neither includes a Picatinny rail mount. The OtterBox is mostly limited to belt-clip holsters, and the LifeProof has those as well and more. One accessory that we found very intriguing was the LifeProof handlebar mount. They claim “if it has handlebars, you can mount your iPhone 5 to it” which makes us wonder what else we could mount it to.

This article originally appeared in the April 2014 issue of GunUp:The Magazine.