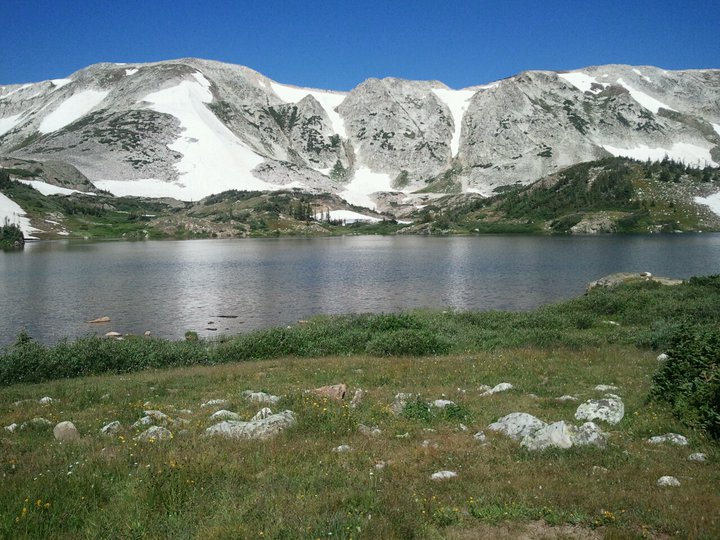 Since I’ve been working up in the northern Rocky Mountains and western plains for the past few months and had a few days off, though not enough to return home for a spell, I flew the wife up to Wyoming with me so that we could explore the mountains and forests of the Snowy Range together. The mountains of the Snowy range lie just west of Laramie where they stretch north to south from Wyoming into Colorado. Though not extremely tall, there are a few peaks topping out just over 12,000 feet. Medicine Bow, pictured to the right, is one of those summits and tops out a hair over at 12,013 feet above sea level.

She was eager to get out and go exploring the numerous trails that wound up, down, and around Medicine Bow and the neighboring peaks. I was eager as well, and was hoping to convince her to join me on a hike up to the top. Even though it was a beautiful summer day, and we were planning a day hike that was only a few miles long, I still loaded up two small backpacks with some water, munchies, first aid kits, and rain gear. Despite the fact that this was an easy hike, conditions in the mountains can change rapidly. Accidents can and do happen, and having a bit of food, water, and some light weight rain gear in addition to a decent first aid kit can make a huge difference. 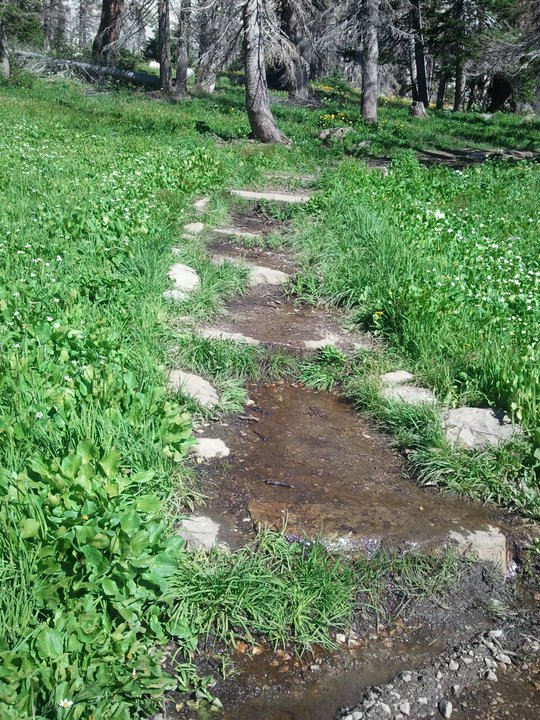 The hike started out pleasant enough, with mild temperatures and moderate elevation changes. Snowmelt made the ground soft and we had to wade through a few rushing streams in places. The wife stopped from time to time to snap photos of various flowers along the way. More on that later.

Soon, the climb became significantly steeper and my darling bride began to lag, her strength sapped by the thin air over 10,000 feet. I pulled out the GPS and we discussed briefly which route to take. I wanted to ascend the steep trail to the top of the peak, but not having had time to acclimate to the altitude, my better half was more than content to explore the lower elevations below the tree line. It took a bit of encouragement, and no small amount of cajoling, but eventually she was persuaded to attempt the climb.

The route we took was considered “Difficult” by the trail map, but I was undeterred. Though the route was steep, it was not long, and we could easily complete the climb in a few hours. Still, looking up from the saddle between Sugarloaf and Medicine Bow, the path appeared daunting. I assured her that we had plenty of time and could take as much time as we needed to, with as many breaks as were necessary to complete the climb.

Despite the grumbling, muttered comments about my ancestry, whining, and generally complaining about how mean I was to drag her up such a steep route when I’d had time to acclimate to the altitude and she hadn’t, we slowly but surely made our way to the top.

The final stretch of trail involved one of two routes: either trekking up a steep (and slippery) snow field, or hopping from boulder to boulder up a rather uneven slope of massive rocks. At first, darling wife wasn’t going to make the final 400 yard push. She was more than content to sip some water while catching her breath at the false summit just below the peak. At her urging, I started to go on to the peak without her, but changed my mind and turned back. Either we both go, or we both stop short.

It wasn’t intended as a guilt trip, but it worked just the same. After grumbling a bit more, she got to her feet and we both went up the snow field to the top. Along the way, we discussed the journey a bit, and I discovered that she’d never actually summited a mountain before. Through the 8 years we’ve been married, though we’d taken a number of hikes together at lower altitudes, we’d never had the opportunity to hike the higher elevations together. Despite all the complaining and grumbling along the hike to the top, the entire trip was worth it to see her smile upon standing atop the brass plate set by the USGS at the highest point of the mountain.

Standing at the top of any mountain peak is an accomplishment. The symbolism of reaching such a goal has become embedded in our language. I’ve climbed a number of peaks across North America, including a number of the “fourteeners” coveted and collected by hikers in the US. This was a first for my wife, and though it was only a lowly “12’er” I was glad to share the experience with her.

It was the trip back down that was a bit harder on me. Younger hikers may not realize it, but the pounding that the body takes when going down a steep path is very difficult on the joints. Each step includes a braking action when descending a slope, and my joints began to ache from the jarring and compression. So, as on the way top, we stopped from time to time to take in the view and snap a few shots of the flowers that fairly littered the slopes.

August is a beautiful time in the high alpine. Above the tree line, dense snow packs often linger into the late summer. The water that slowly melts from these areas flows down the rocky mountain face, and hundreds of different species of wildflowers, shrubs, and various groundcovers spring up along the way. Add in the bright summer sun and drenching thunderstorms that are so common in the late afternoon, and it’s a paradise for plants that can tolerate the thin atmosphere.

Though we primarily stopped to let the wife catch her breath on the way up, and to allow me to rest my knees on the way down, it was actually much more enjoyable to take it slow and stop from time to time to enjoy the panoramic vista along with the plethora of plant and animal life that surrounded us. In addition to the panoply of flowers that blanketed the ground, chipmunks and pika scurried amongst the rocks and shrubs, occasionally scolding us with sharp chirrups as we passed nearby.

Between the two of us, we could identify many of the plant species. Yarrow, Colorado Columbine, Fleabane Daisies, and dozens of other plants in bloom were in abundance. Others we could not identify and simply marveled at their beauty and tenacity in the harsh environment.

Soon enough, we descended back below the tree line where the thick stands blocked the harsh winds that whipped about just a few feet higher. Famous mountaineer George Mallory, who lost is life in a bid to reach the summit of Mount Everest, was asked prior to his expedition “Why do you want to climb Mount Everest?”

His answer: “Because it’s there.”

People head out into the back-country for any number of reasons. Solitude, beauty, in pursuit of wild game, or sometimes, just because it’s there. We didn’t have any particular reason to climb a mountain that day. But it was there, and so were we. Such is the beauty of exploring the outdoors. We didn’t discover a new unexplored area. We weren’t the first to climb the peak. We weren’t chasing after deer or elk, and we weren’t on a quest to simply reach a destination on the other side. No, this trip was simply about being out in the wilderness, miles from nowhere, and enjoying the absolutely breathtaking beauty that surrounded us.

That was enough reason by itself.