EDC or Every Day Carry: All you have is what’s in your pockets 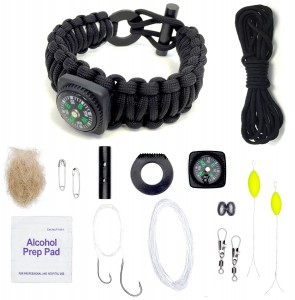 A “bare-bones” survival kit that can be worn as a part of your EDC (Every Day Carry).

We all have an every day carry, or EDC for short. Those of us who have CCW’s (Permits or Licenses to carry a concealed pistol) generally have an EDC that include a few more things than the average person. But have you ever looked at what’s in your pockets with the idea of a survival situation in mind? Guys, generally, have a wallet with cash, maybe coins, a few credit card type cards and maybe business cards in them. We’ll have a watch on our wrist, a phone in a pocket or on a belt holster, car keys in another pocket, etc. Women might have a makeup compact with a mirror or some other things.

Screwed, right? Not totally, really. You will have to science the f*** out of what you have though, to borrow a phrase from The Martian. The credit cards can be sharpened by rubbing on cement or a rock to make a sort of knife you can use cut meat you’ve cooked. Just as they are they can be used as a scraper (who hasn’t done that) or descale a fish or even cut and gut it for cooking. Coins can be turned into impromptu screwdrivers; keys can be used as stabbing tools in a snare, or weights on a fishing line. The phone might work as a signal mirror, if you take the anti-glare screen protector off first. The watch can function as a rough compass during the day as well as work to give you your latitude and longitude position using either the stars or the sun, provided the time set on the watch is right. The pins holding the band to the bezel can be bent into fish hooks.  That t-shirt under your polo or dress shirt, stretched over several poles can serve as a wind break or something to keep at least your fire wood dry enough to burn. With a little imagination and desperation you can figure out a lot of stuff for what you walk out the front door with every morning.

But it doesn’t have to be that bad. And without looking like Adam West’s Batman with his utility belt strapped around you either. You can improve your odds by adding a few simple things that will fit in your pockets.

I keep a credit card survival tool in my wallet. Actually it’s much shorter than a credit card and it fits nicely in a small side pocket in my wallet. We sell them at Among The Leaves and include them in all our pre-equipped kits. It has a can opener, a saw, a knife, a screwdriver, a few small sockets, and a few more useful tools. All in something that’s barely thicker than a credit card. I barely remember it’s in there most times… till I need it.

Stick a flashlight in your pocket. I have a small flashlight, runs on a single CR123 battery and can put out a max of 210 lumens. That is seriously bright. On lower lumen setting it’ll last for several days and has an SOS flash setting. Add in a bit of wire, you can use the battery to start a fire.

Adding a paracord bracelet to your wrist is a low profile yet incredibly useful piece of kit. Just having 6 to 12 feet of paracord can set you up with shelter, fishing line, snares, maybe even a small fishing net. We, here at Among The Leaves, sell a survival paracord bracelet that includes a compass, saw, fishing hooks and line inside, and a fire starter. Paracord comes in every color under the rainbow so you don’t have to look like Tactical Timmy wearing one.

Add a knife to your back pocket. I recommend a nice folder with a frame lock system, but a good liner lock system is just as sturdy.

So, with just little things that fit on you or in your pockets, you’ve, I think, dramatically improved your life in a bug out or survival situation.

An important point here is that they are either worn on you or in your pockets. You can get separated from a purse, lose a back pack; forget a pouch on the ground. Heck, you might even have to abandon them all in your car to get out as fast as possible, but so long as you’ve not lost your pants those things you have on your body are coming with you.