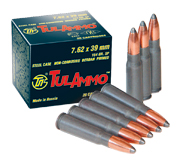 Most people who have ventured into the realm of handloaded ammunition have broached the question at least once: Can steel-cased rounds be safely reloaded? Obviously they’ve been safely loaded at least once at the factory. Why can’t they be reloaded?

The answer is that they can be, and of course that tentative “Yes” is followed by a very big “but…” which should lead you to correctly believe that there are some pretty big caveats. To start with, there is an inordinate amount of military surplus steel-cased ammunition out on the market that is Berdan primed, meaning that it has two or more smaller flash holes and a center protrusion that acts as the anvil for the primer. This obstacle is not insurmountable, but it is significant. The second problem is the steel case itself. Like brass, it is ductile and malleable, but steel is also tougher. In addition it tends to have more memory and will spring back to its original shape after firing, unlike brass which remains formed to the chamber dimensions.

If you’re unlucky enough to have Berdan primed cases you’d like to reload, the first challenge is removing the spent primer. Confirm that you do indeed have Berdan primed cases by using a small bore light to illuminate the interior of the case. The presence of two or three small flash holes, as opposed to the single larger flash hole found on Boxer primed cases, indicates that you you won’t be able to deprime the round with a traditional decapping die. Instead, the best method is to remove the primer hydraulically. Water is incompressible and readily available in most circumstances. Simply fill the case with water and use a piston roughly the same diameter as the case mouth to drive the primer out by rapidly and forcefully ramming it into the case. A screwdriver can work in a pinch. Some water will spurt out around your improvised piston, but the rest should force the primer out of the pocket.

Of course, at this point you’re left with the option of either seeking out very hard to find Berdan primers, or machining out the projection, flash hole, and possibly even the primer pocket in order to safely load a Boxer primer. Whichever option you choose, do not under any circumstances attempt to prime a Berdan case with a Boxer primer: the projection of the case in the center of the pocket serves as the anvil and will cause a Boxer primer to detonate.

Steel cases are much more prone to oxidation when compared to brass. Most are covered with a polymer or laquer coating in order to prevent rust. I’d recommend against using cases that show any signs of corrosion, as this can weaken the case catastrophically and result in a rupture that could damage your firearm, injure you, or even kill you. Cleaning a steel case presents the next problem. Hard media such as stainless steel pins will scratch or even completely remove the protective coating. Ultrasonic cleaning is the best approach, but if you must use a traditional tumbler to clean the cases make sure to use a softer media such as corn cob.

Luckily, for most people attempting to reload steel-cased ammunition, modern steel cases are manufactured using Boxer primers and the single large flash hole to which we are accustomed. This leads us to the next step: resizing. Carbide dies, while not absolutely necessary, are highly recommended. You’ll also need to make sure that the cases are well lubricated in order to avoid getting them stuck in the die.

From here on out, the method for reloading steel-cased ammunition is very much the same as loading brass-cased rounds. The one part that may be difficult in some cases is seating the bullet. As mentioned above, steel cases have more memory than brass cases and will tend to spring back to their original shape. Because of this, seating a flat based bullet can be more difficult even if you’re using a throat expanding die.

Frankly, other than a complete “zombie apocalypse” scenario it’s hard to come up with a situation where you would need to know how to reload steel-cased ammo. Brass, both new and once-fired, is abundant and easy to find. Even preppers anticipating a complete grid-down collapse would have a hard time making the case that brass will suddenly up and disappear. Still, if you’re concerned about whether or not it’s possible to do, or if you just want to try it out on a lark, rest assured: it can be done.