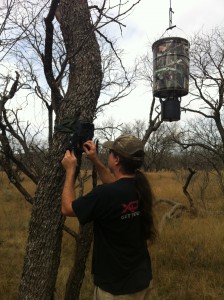 Hunting season is over, but that doesn’t mean that you’re stuck waiting until the leaves begin to turn before getting ready for next season. There’s a saying that goes something like this: “Proper Prior Preparation Prevents Pretty Poor Performance.”

All too often I’ve found myself waiting until the season is about to begin, usually around the time I pick up my hunting license in late August, before beginning to check my equipment and scout the properties I have permission to hunt. This is a recipe for an unsuccessful season and has left me fruitless in my search for wild game on more than one occasion. With just a few chores out of the way however it’s possible to be prepared when opening day sneaks up on you this year.

To start with, don’t neglect any equipment kept out on the land itself. If you have a deer stand that stays up year-round, it’s a good idea to clean it out periodically so that you’re not sharing it with a bunch of spiders, wasps, mice, and other pests on the first day of deer camp. In states where it is legal, tend to any bait stations and game cameras you have set up. Replace the batteries in game cameras and feeders where necessary.

In areas where electronic monitoring and baiting is not legal, take the time to make notes of recent activity. Scouting like this is probably the most important thing you can do to ensure you have a successful season. Patterning animals during the summer months will help you to better determine where the best areas to hunt will be once the season begins. Simply by spending more time in the same environment as your prey will better allow you to understand their routines and note any changes.

Take a walk through the area you normally hunt. Deer and other game animals change their habits over time. Was a scrape that is normally active ignored this year? What about bedding areas? Has excessive rain or a drought changed the areas where water can be found? Changes in weather will affect what foods are abundant or scarce. I carry a handheld GPS with me during these little scouting trips so that I can mark areas of interest.

Of course it isn’t always possible to venture outdoors on a regular basis. Perhaps the area you hunt is far away, or family and work obligations take priority. There is still quite a bit you can do in the evenings at home. During the heat of the summer, when the blazing sun makes it more comfortable to stay indoors with the air-conditioner on full blast, I like to take the time to detail strip and clean my hunting rifles and shotguns. 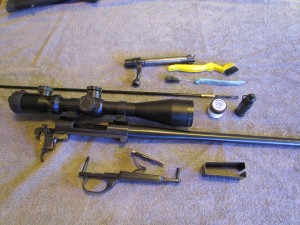 The first step, after ensuring the firearm is unloaded, is to field strip it. Next remove the forearm and stock from the barrel. Clean out any dust, dirt, or other debris that has found its way in there. Spending hours prone in the dirt, climbing into and out of trees, and wandering through thick undergrowth is a fantastic way to get all manner of gunk in your gun and none of it is good for its accuracy and reliability.

While we’re on the topic of firearm maintenance, when was the last time you removed all of the copper from your barrel? Use an ammonia-based compound to clean out any copper fouling and follow that up by scrubbing the barrel with a non-embedding bore compound.

That done, it’s time to detail clean and re-oil the bolt and trigger assembly of your rifle. The bolt itself should be broken down according to the manufacturer’s instructions, cleaned, re-oiled, and reassembled on an annual basis. The trigger assembly should also be cleaned and lightly oiled, though a total disassembly is usually not recommended. Instead, use a toothbrush to remove dirt and debris and re-oil or grease according to the manufacturer’s recommendations.

If you use an autoloading shotgun or rifle, take care to inspect and clean the recoil spring. In most models the recoil spring tube extends into the buttstock where it tends to attract dirt and grime. The recoil spring in an AR-15 style rifle for example is generally fairly easy to service. Other makes and models will require a bit more work, but it remains important to clean out and lightly oil the recoil assembly on your automatic.

Scope bases and rings should also be checked for play or loose components. Use a bit of thread lock on any bolts or screws that have come loose. Sling swivel studs should also be inspected for any excessive play. I usually just snug them down if they are loose and add a very small bit of RTV silicone around the base where the stud touches the stock to keep dirt and moisture out.

If there is any equipment that should be sent to a gunsmith or archery shop for service or repair the summer months are the perfect time to do so. August and September mark the beginning of the busy season for these businesses and you may face a long wait before your equipment is ready. Get your bow, rifle, or shotgun into the shop now and you’ll be all set to hunt when the season starts. Additionally you’ll help to support the businesses we rely on when their budgets shrink during the off-season.

Finally, if you hunt from a tree stand, you owe it to yourself to carefully inspect your safety harness and all of the straps and ropes on the harness and stand itself. If there is any sign of fraying or stitching that is beginning to come loose, replace the equipment immediately. Falls out of tree stands or elevated platforms kill more people every year than any other cause while hunting. Don’t become one of those statistics.

If you take care of your equipment during the off-season, it will be ready for you when the season begins. Know the land you hunt on and know your equipment. Even if maintenance is not required, the increased familiarity you’ll gain with your gear and the territory you hunt will pay off dividends.