Where Are All The Reloading Components? 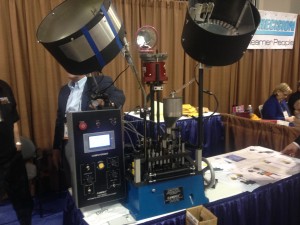 Small commercial sized reloading setups, such as this one, gained a lot of attention at SHOT.

Every time there’s a threat of additional gun control legislation, or even just a feeling that more laws may be coming, people flock to the store and strip the shelves bare of not only firearms, but the ammunition to feed those firearms. Naturally shortages soon emerge as retailers, wholesalers, and manufacturers see their entire inventory bought up. It’s not unusual then for hunters and shooters seeking ammo to start looking at reloading, and that part of the industry then sees the same shortages.

The most recent iteration of this phenomenon started back in December of 2012, and we have yet to see it completely resolve itself. While rifles, shotguns, and handguns are now almost back to “normal” levels in terms of availability, the cartridges themselves are still hard to find along with the components needed to handload them.

At the SHOT show this year I had the opportunity to gain some insights into the state of the industry. All of the major manufacturers and distributors had booths, as they normally do, but the number of new products was markedly down compared to past years.

I spoke with Kent Sakamoto, the RCBS Senior Product Marketing Manager for ATK. He said they’ve been focusing on production and haven’t spent much effort in R&D for small arms. The long and short of it is that all manufacturers, even the big ones like ATK, are months behind on orders. It could be up to a year before we see supplies start to equal demand across the board.

While there are shortages of components like brass and lead, the biggest problem is supplies of powder. This matches my own observations and inability to find the most common and popular smokeless powders.

Rob Behr of Western Powders, a distributor for Alliant and Norma among others, reiterated what Kent had told me. They are shipping to their retailers as fast as they can, but manufacturers are unable to catch up as of yet. We can expect to see brass and bullets become available first, followed by primers and finally powders.

What does this mean for you?

Basically, it’s time to hang tight for a little bit longer. As manufacturers catch up, we’ll see components stay for longer and longer on the shelves at retailers. This shortage is a bit different than those in the past in that we’ve seen across-the-board shortages of not just factory cartridges, but also components.

Many shooters who were caught flat footed in other recent shortages decided to get into loading their own. One could suppose that this is a good thing. It certainly helps us in the long run, but for now it also means that there’s more demand for the components that are available.

In the meantime, it might be prudent to work up some alternate loads. If your favorite powder is Varget, and it’s unavailable, look up a different load using something with a similar burn rate like IMR-4320 or Reloader 15. As always, don’t mix and match incompatible components, double check your recipe against your reloading manual, and of course start low and work up to your ideal charge.