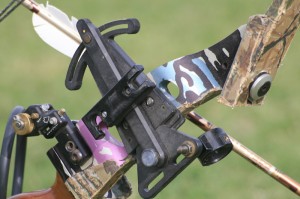 First off, going for a headshot on a deer with a bow is idiotic. Your chances, even if you hit the brain, of a clean kill are somewhere between slim and none.

Second, this is also why I don’t do headshots on deer with a rifle either. It’s too easy to miss, and if you don’t miss cleanly you have a zombie deer with grievous but not immediately life-threatening injuries.

So when I see articles like this (warning: graphic), I just have to shake my head.

A hunter’s arrow that had pierced both sides of a young deer’s head has been successfully removed, according to state officials and the woman who first notified authorities about the animal.

Staff from New Jersey Division of Fish and Wildlife tranquilized the deer Saturday afternoon in the backyard of Susan Darrah’s Rockaway Township home, removed the arrow, treated the wound and released it back in the wild, Darrah said today. DEP Spokesman Larry Hajna confirmed the arrow removal.

Shots to the vital area of a deer just behind the front legs, whether from a bow or rifle, are always fatal. Don’t risk injuring a deer by trying for a head shot. It just isn’t worth it.