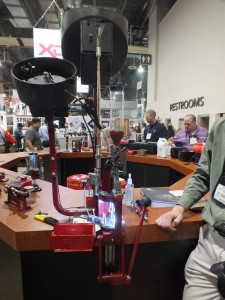 With ammunition shortages occurring more and more frequently, and prices on cartridges going ever skyward, it seems like growing numbers of people are becoming interested in handloading or reloading their own cartridges.

Availability during shortages, and a fear of high taxes on ammo or restrictions on sales, is a big motivator. Of course, you could just as easily store large quantities of cartridges. Some components such as powder will degrade over time simply by sitting on the shelf, and this can present a problem. Not all powders degrade safely. Additionally, if exposed to too much humidity it won’t fire, at least not very well, when loaded. If you find yourself without certain necessary items during a shortage, primers for example, your ability to load your own ammo will be seriously curtailed. It takes a bit more planning, but by keeping tally of the date of manufacture of your components you can avoid problems.

It used to be that economy was one of the biggest reasons to handload, but with production capacity of large manufacturers growing and the steadily increasing cost components such as lead, copper, and primers, the price advantage has dwindled. You can still save a few pennies per round on common calibers such as 9mm and .45 ACP, more on rifle cartridges, but when you take into account the startup costs of getting the required equipment it’s possible that it may take far longer than originally anticipated to recoup the investment. You might find that unless you simply enjoy the meditative aspect of handloading your time might be better spent doing other things.

Having control over the quality of your own ammunition is the primary reason I handload my own cartridges. Sorting bullets by size and weight and using exacting standards when preparing your brass and measuring your powder charge pays off in dividends when extreme accuracy is the goal. For competition rifle shooters, especially those who fire benchrest or compete in extreme long-range events out past 1,000-yards handloading is nearly a requirement. Crafting precision ammunition to such fine tolerances can be a hobby by itself.

Specialty applications such as Remington .22 BR and 6.5-284, or obsolete calibers such as .577-450 and 7.7×58 are all perfectly suited for handloaders. Benchrest shooters not only load for exacting quality, but also because many of the calibers favored by those in the sport are not commonly available. The same goes for antique and C&R (Curio & Relic) collectors who own and enjoy shooting firearms chambered for ammunition that is no longer available.

Still thinking that rolling your own ammo is for you? There are some startup costs to consider. A press, scale, dies, scoops, and a reloading manual, on top of your cartridge components (powder, brass, primers and bullets) are bare minimum requirements and can set you back a hundred dollars or so. More expensive setups and additional accessories such as tumblers and media, case trimmers, and trays can jump the price up even more. If you handcast your bullets for low pressure rounds you might save a little on components, but the molds and lead-pouring equipment will add some to your startup costs.

Getting into handloading or reloading ammo is a bit of an investment. Storing your equipment will take up a significant amount of room and you’ll need a well lit area to spread out when it’s time to load. If you’re like me, convincing your spouse may also take some effort. The rewards however, whether it’s economy, availability, or precision, may make it worth it.