A recent study by the US Fish & Wildlife Service shows the first overall increase in hunters in more than a decade. Special interest groups supporting hunters and outdoorsmen have been lamenting the decline of our various sports and activities for years.

A groundswell of support encouraging hunters to support local outdoor youth activities has apparently begun to pay off.

In 2011 90.1 million Americans, 38% of the U.S. population 16 years old and older, enjoyed some form of fishing, hunting or wildlife-associated recreation. Outdoor recreation is a huge contributor to our nation’s economy.

Expenditures by hunters, anglers and wildlife-recreationists were $145.0 billion. This equates to 1% of gross domestic product; meaning one out of every one hundred dollars of all goods and services produced in the U.S. is due to wildlife related recreation.

Almost 37.4 million Americans participated in fishing, hunting or both sports in 2011. These sportsmen and women spent $43.2 billion on equipment, $32.2 billion on trips, and $14.6 billion on licenses and fees, membership dues and contributions, land leasing and ownership, and plantings for hunting. On average, each sportsperson spent $2,407 in 2011.

Hunters spent $34.0 billion on trips, equipment, licenses, and other items to support their hunting activities in 2011. The average expenditure per hunter was $2,484. Total trip-related expenditures comprised 31% of all spending at $10.4 billion. Other expenditures, such as licenses, stamps, land leasing and ownership, and plantings totaled $9.6 billion, 28% of all spending. Spending on equipment such as guns, camping equipment, and 4-wheel drives comprised 41% of spending with $14.0 billion.

Overall hunting participation increased 9% from 2006 to 2011. The numbers of big game hunters rose 8%, migratory bird hunters increased 13%, and hunters seeking other animals increased by 92%. The number of small game hunters declined 6%, which is not statistically significant.

Total hunting-related spending increased between 2006 and 2011. There was a 30% increase over the five-year period. Purchases of hunting equipment such as guns, decoys, and ammunition increased 29%. The category with the biggest increase was land leasing and ownership with 50%. Trip-related spending was up 39%.

The 10-year comparison of the 2001 and 2011 Surveys shows an increase in both the number of hunters and their expenditures. Overall participation was up 5% over the time period. Big game hunting increased 6%. Small game and migratory bird hunting had declines of 17% and 13%, respectively. Other animal hunting increased 107%. Total hunting expenditures increased 27%. Expenditures for hunting equipment, such as firearms, ammunition, and archery equipment, increased 33%.

With more than 90.1 million Americans 16 years of age and older participating in 2011, wildlife-related recreation is clearly an important leisure activity in the U.S. An average of nearly four out of ten people you meet will participate in some type of wildlife recreation. By comparison, there were 36 million recreational runners in 2009.

Wildlife recreation is not only an important leisure activity but it is also a catalyst for economic growth. Hunters, anglers and wildlife watchers spent $145.0 billion on wildlife-related recreation in 2011. This spending contributed to local economies throughout the country, which added to employment, raised economic output, and generated tax revenue. 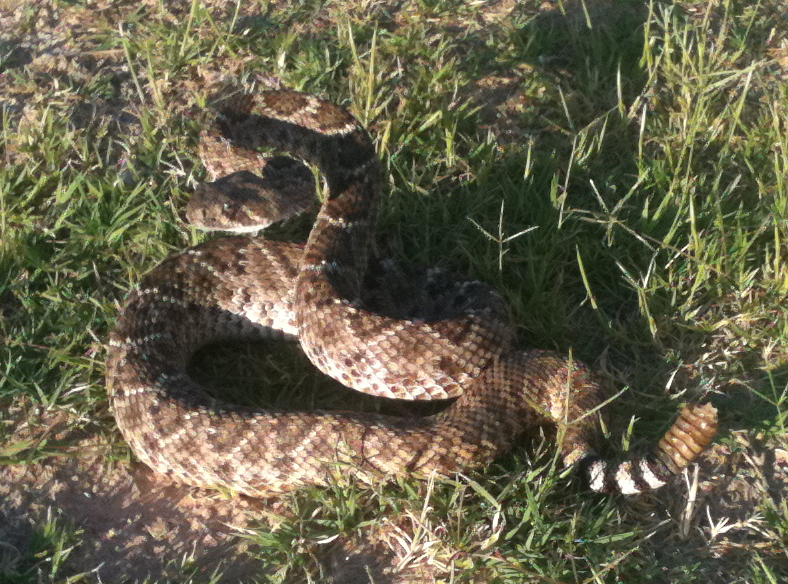 Crotalus atrox, more commonly known as the Western Diamondback Rattlesnake, is one of the many animals that call the Chihuahuan desert home. I came upon this medium-sized 3-foot long specimen while out walking last week. It was evening and he was stretched out on the sand, soaking up the last of the warmth before the cool desert night set in.

Normally, unless I’m hunting them for food and skin, I’ll just leave rattlers well enough alone. Unfortunately, that wasn’t an option here: this guy was very close to an area with human traffic. He had to be dispatched.

Rattlesnakes are frequently hunted for both their meat and their skin. Properly prepared, rattlesnake meat is savory and tender. Many people inadvertently overcook the meat however, and it becomes tough and rubbery. Either fried or sautéed in butter, it doesn’t take much to cook it. The lower part of the meat closer to the ribs and the snake’s belly is thin, while the upper part close to the spine is thick. There is little danger in slightly undercooking rattlesnake, and I recommend preparing it so that the thin portion of the meat is medium-well, leaving the inner portion of the thicker side rare. This ensures that the meat is still tender and flavorful.

In our journey to get Evyl Robot his first deer (or feral hog) on his property in Central Oklahoma, we’ve scouted the area extensively, cataloged game trails and sources of food and water, and set up a game camera to get a rough census of the local wild game population.

There have been numerous crows, tons of raccoons, squirrels, rabbits, not a small number of deer, but no feral hogs. And this past weekend we got the first evidence of predators (other than the two legged kind) captured on the Moultrie game camera. 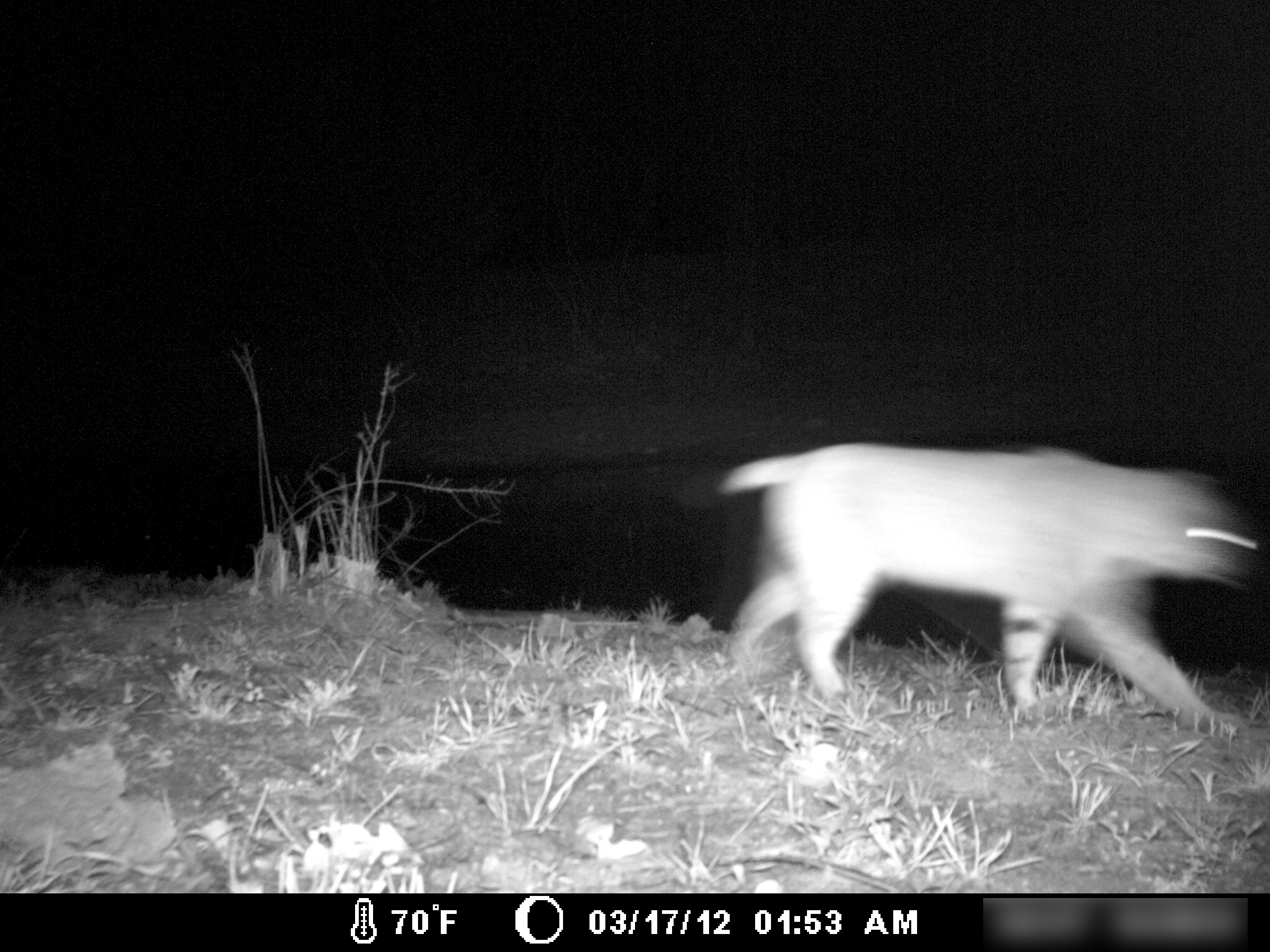 That there is Lynx rufus, otherwise known as a bobcat. 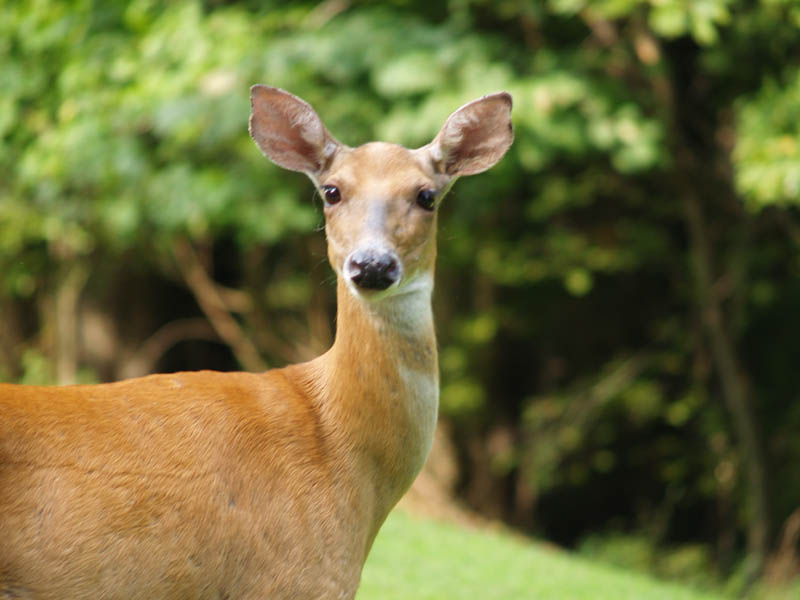 This is a subject I’m frequently torn over.

To me, hunting is a year-round activity. Even when game are not in season, days on end are spent in the woods hiking and scouting learning about the animals and their habits. Where legal, bait stands have to be refilled even in the off-season, and shooting lanes around blinds and stands have to be maintained.

Recently my day job has kept me behind a desk and out of the woods so I haven’t been able to be as diligent at scouting. In fact, I haven’t made it out into the woods at all since April this year. Naturally, as I watch deer season come to a close, I’ve got the urge to get out and see what I can find. But I’m afraid that without having the chance to scout my favorite hunting grounds before hand I’d just be wasting my time.

This has me looking at paying for a guided hunt.

Guided hunts come in many forms, and many prices. Some take place on huge 10,000 acre ranches with miles of 10 foot fences keeping monster bucks and does alike on the property. Smaller operations on ranches only a thousand acres or so in size offer a bit better odds for a hunter who only has a limited amount of time for a day-hunt. These kind of enter a bit of a moral gray are for me though. Even if the animals are wild, not hand-raised, if the herd is captive on a thousand acres or so, can we really call it hunting?

Then there are the “canned-hunts” that take place on facilities that are much smaller, only a few hundred acres, with bottle-fed bucks with no fear of humans wandering the park-like grounds. I’m not even sure these even qualify as hunting. Harvesting, maybe. Regardless, many of these operations are pretty unethical in my opinion.

Google “Guided Texas Deer Hunt” and you’re instantly bombarded with literally thousands of options. Most of these offer “guaranteed” trophy bucks with kill fees based on the size of the rack. Deer breeding and “hunting” ranches have become a multi-BILLION dollar business lately. Naturally however these outfits spend thousands of dollars on ads and SEO to remain near the top of the search results. When a quality “shooter” buck can cost an operator over ten thousand dollars, and exotics even more, it’s easy to see why.

Show me a low-fenced ranch where the guides have spent days scouting out the best locations, identifying scrapes and noting what game trails are active, and that’s where I want to be. Finding a quality guided hunt like this is not very easy however, and this late in the season many ranches are fully booked up.

I’m keeping my eyes peeled If I don’t get a chance to go up to Oklahoma to hunt with Evyl Robot before their gun season is over, I may just find a nice big low fenced ranch with a quality management program where the bucks roam freely and the does have never seen the inside of a stock trailer. 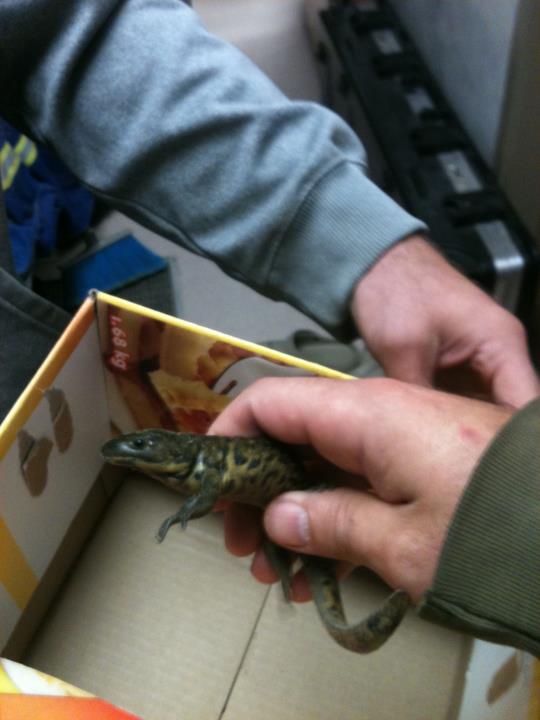 Found this guy wandering around the job site not too long ago. He’s a Blotched Tiger Salamander (Ambystoma tigrinum melanostictum) and can grow to over a foot in length.

Seeing this adult Tiger Salamander is actually fairly unusual, as they usually make their homes in burrows as deep as 2 feet below ground. Young Tiger Salamanders are purely aquatic, but adults are wide ranging dry-land dwelling amphibians. As one of the largest and hardiest of land dwelling salamanders, they are popular as pets, but illegal to sell in the United States.

We let this guy go in the nearby field where he was found.