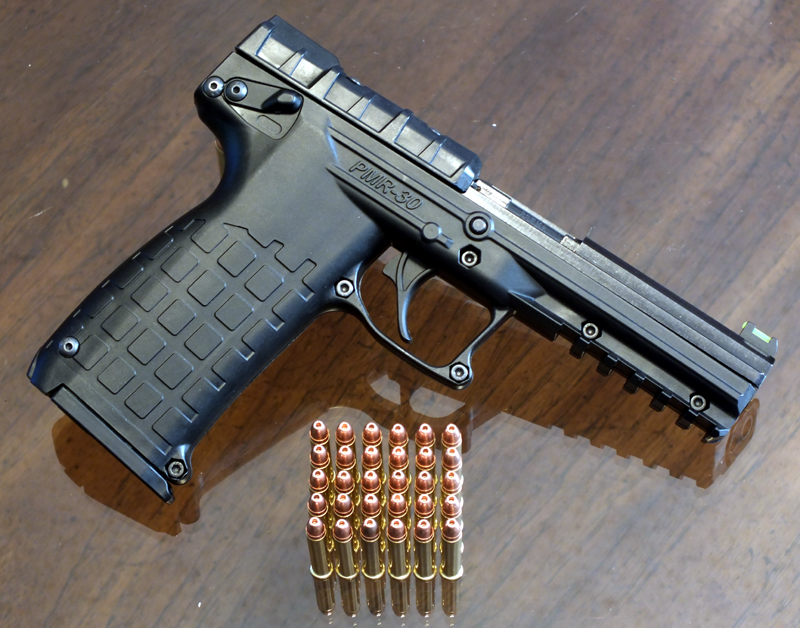 I finally found one.

I’m not one of the “cool” gun bloggers who got a prototype or advance copy for review. I still have to hunt down most of my own products to review.

After more than a year of searching, begging, pleading, and generally making an ass of myself, I finally found a PMR-30. While still significantly over MSRP, it was the first I’d found under $500, and I happened to find it completely by accident while wandering into a gun store more than 1,300 miles from home. Which meant, thanks to our curious gun laws, that I couldn’t take delivery of it there, and instead had to pay extra to have it shipped to another FFL located here in Texas.

There, it would wait for me until I returned home, nearly 2 months later.

I picked it up from my local FFL, and took it straight home for a photo shoot. Oleg Volk I am not, but I did my best to get some decent shots for this article. And I figured out how to get that nifty square of 30 CCI Maxi-Mags alongside the pistol (hint: just dump the container upside-down very quickly and then carefully pull it off).

After the initial photos, it was time to head for the range.

Now, the PMR-30 has been the subject of some controversy. Rimfire cartridges in general are less reliable than their centerfire counterparts. In addition to that, the .22 WMR presents some unique challenges to engineers who would chamber an autoloading pistol in this caliber. It has significantly higher pressure than a .22 LR cartridge, and the late peak pressure can cause case extraction problems.

Kel-Tec uses what they call a “hybrid” blowback design, described by in-house engineer Toby Obermeit as a “hybrid blow-back/locked breach [sic] system … accomplished using what is effectively a floating barrel.”

The PMR-30 has experienced a number of problems, many of which Kel-Tec has blamed on sub-par ammunition. A note was placed in the pistol case, alongside the owner’s manual, discouraging the use of any foreign-manufactured ammunition. Press releases from Kel-Tec have also explored the problems that some have experienced with the pistol keyholing 40 grain CCI Maxi-Mag ammunition.

We decided to approach this issue head-on. 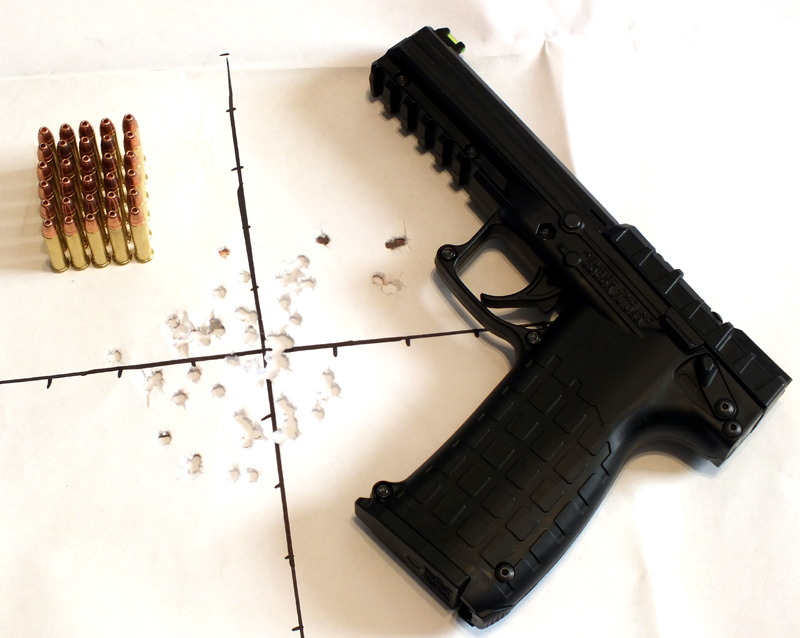 With a couple hundred rounds of 40 grain hollowpoint CCI Maxi-Mags, we went to the range with the PMR-30. To test the gun, we headed out with the pistol as it comes from the factory with no additional cleaning, lubrication, nor even a break-in period. After more than 200 rounds fired rapidly out of the 30 round magazines, we experienced zero malfunctions, no misfeeds, FTEs, FTFs, and certainly no keyholing as you can see by the image to the left.

No, the little gun performed admirably with nary a hiccup, and with a reasonably tight group fired rapidly at 10 yards off-hand. Despite the fact that our gun did not have the “updated” barrel, and using ammunition reputed to have serious keyholing problems, we experienced no issues whatsoever.

What can one conclude from this?

In our opinion, not much. This is a great trail and hunting pistol for areas where bears are not common, and we intend to test it as such. Accuracy seems to be adequate, but we’ve not yet seen how well it performs on small game.

We’ll continue to shoot it, test it, and even compare it to other similar fireams such as the AMT AutoMag II and the FN Five-seveN (centerfire though it may be). In addition, we’ll be requesting a replacement barrel from Kel-Tec with the upgraded twist rate, and report back on the differences.

Pistols
pistols
How smart is it really?
Gun Show Recap