There are two things a gun is useless without: ammunition, and the knowledge and training on how to use the firearm effectively. Acquiring ammunition for your firearm is, in most places in the United States, fairly easy to do. Training on the other hand, can be a bit more problematic.

Good training starts with establishing the proper form, techniques, and habits and then drilling on these relentlessly. The problem arises that finding a range that will allow you to do more than stand and fire slowly at paper targets is easier said than done. In most cases you can completely forget about practicing draws from a holster or moving and shooting at a range. What’s more, training on a range requires the expenditure of ammunition, and that can get expensive quickly. Foregoing the expense of buying more ammunition for your firearm makes it, once again, useless with nothing to feed it.

Dry-fire training is a fantastic way to work on some techniques, such as drawing from a holster and reloading. On some guns, such as a double action only (DAO) pistol, or pump-action shotgun or rifle, you can even use snap caps and step up your training another notch. Users of single action (SA) and some striker-fired pistols are limited in the manner in which they can train using dry-fire, as these firearms must be cocked or charged in order for the trigger to function properly.

Training using dry-fire has one other major drawback. It’s boring. Frankly, it’s really boring. When it comes to training it’s really hard to beat the satisfactory “ping” of lead on steel and the immediate feedback that comes with it. 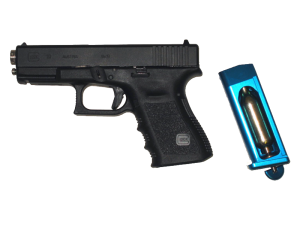 Dedicated shooters can combine this home training system with advanced firearm simulators such as Dvorak’s CO2-powered tetherless recoil and laser system. Dvorak’s system uses a CO2 cartridge contained in a replacement magazine to activate the bolt and a laser, giving simulated recoil with each shot. In doing so the working of the action charges the striker or resets the hammer, depending on the type of firearm it is used in.

It’s because of all of this that I’ve found myself constantly seeking out better, and more engaging, training systems and regimens. While wandering the aisles at SHOT 2014 I saw a few advances in laser training systems, but none of them really caught my attention at the time. It wasn’t until a few months later while visiting Bill’s Outdoor Sports in Enid Oklahoma that I got into a conversation with company President Brian Lamoreaux. He happened to mention that they had just installed a new range and wondered if I wanted to see it. I agreed and we went outside where he revealed an intermodal shipping container with a ventilation system on top and a single door set into one end. Initially, I was underwhelmed. After all, how good could a shooting range inside of a 40-foot shipping container actually be? I would soon find out.

As we stepped inside I saw a computer system against one wall, a projector mounted to the ceiling, and a large white screen on the opposite end. A small table with a laser firearm trainer sat on the shooting line. This was, Brian explained, a Laser Shot container system designed for both laser-equipped training guns as well as live fire, and he loaded up the system and started a steel plate shooting program to give a demonstration. I was intrigued. 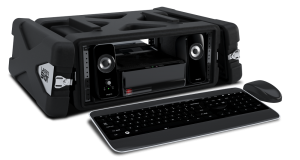 The PSATS – the brains of the Laser Shot system.

The Facts
The Laser Shot Container system uses thermal imaging to track the round as it travels down range, picking up the location where hot bullet disappears behind the self-healing polymer screen. The computer correlates this hit location with the location of the target that is being projected and respond accordingly, showing the splash of lead on steel or puff of dirt kicked up by a miss.

My experience on that combination live fire and laser system was enough to get my curiosity piqued, and so when I went back home I dug up some of the literature I’d idly picked up at the Laser Shot booth at SHOT. That’s when I saw it: the Laser Shot Home Theater System. This consumer product utilizes much of the same technology as their live fire systems and is designed specifically for use in the privacy of your own home.

When fully set up, the system consists of a projector, a camera, and a computer which coordinates it all, as well as various software programs. The base level model, the HT-205, includes five different training games of your choice as well as a laser rifle with iron sights, and the tracking camera. You must provide a compatible computer and projector, purchase them separately from Laser Shot, or upgrade to the Portable Home Theater Shooting System (PHTSS) which contains all of the above in a rugged 4U rack-mount case.

Additional training firearms are available to be purchased separately, or through package upgrades. The real beauty of the system is that it is compatible with any red laser equipped training firearm. Other brands of laser training arms such as Next Level Training’s SIRT or Dvorak’s tetherless recoil system also work with the Home Theater system. Laser Shot sells various handgun and rifle caliber laser-cartridge inserts to allow the use of actual firearms (unloaded of course) so that you can train with the same gun you carry. 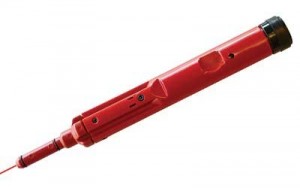 To test out the system I used Dvorak’s tetherless recoil system and the NextLevel Training SIRT-AR Bolt laser system. The SIRT-AR doesn’t work with some ARs without modification (such as my Colt LE6920) but is compatible with most sport model AR-15 style rifles. NextLevel’s SIRT laser replaces the bolt in your upper, and a small adjustable pin magnetically attaches to the trigger pack. When you pull the trigger it activates the laser, firing a beam down and out the barrel. The SIRT-AR has both windage and elevation adjustments so that you can zero it onto your sights or non-magnified optic. This is a great boon when using the Laser Shot Home Theater system since you can virtually eliminate the inherent sight offset that occurs when shooting at a screen that is relatively close.

Government Approved
The Federal Law Enforcement Training Center (FLETC) based in Artesia New Mexico has done a fairly exhaustive study on the effectiveness of non-recoiling laser handguns and found that students using this method as opposed to live-fire achieve test scores nearly has high as those who train exclusively with live ammunition.

Using student volunteers in their Basic Marksmanship Instruction (BMI) they found that when qualifying with live ammunition on the Semiautomatic Pistol Course (SPC) students who trained exclusively with non-recoiling laser handguns scored an average of 257.8 out of a possible 300 points. Students who trained in the traditional manner during BMI scored only marginally higher with an average of 260.4 out of 300. Further studies with a larger test group of students yielded an average score of 275.8 for laser-based training and 278.2 for those training with live ammunition.

This 99% efficiency rate, when combined with the cost savings of thousands of rounds of ammunition, is remarkable. According to the FLETC the difference in performance of both sets of students is statistically insignificant, making laser training as effective as live-fire.


What we like
It’s hard to imagine a more realistic training system than this. Other than using simunitions in a 360-degree live-fire shoot house, this is as good as it gets. The idea that you can train like this in your living-room or home theater is simply amazing.

It was fantastic to be able to move and shoot while engaging the targets on-screen. Using one of Dvorak’s tetherless recoil systems in a Glock 19 provided incredibly accurate recoil while at the same time charging the striker. Magazine weight was similar as well and provided nice balance.

The software provided by Laser Shot spans a robust library with nearly forty titles. From hunting simulations, where the Home Theater system got its start, to trap and skeet, steel plates, various games and drills, and even tactical simulations, there is something for nearly every type of shooter. Most of the programs provide instant feedback as well and a reactive environment. You can see your hits on reactive targets, and in some cases, your misses.

What we don’t like
Using the SIRT-AR in my rifle, or the included pistol in the base package, there was no recoil or report. The trigger feedback wasn’t exactly like an actual trigger, but it was close. This is a problem that remains with most pistol trainers, but it doesn’t seem to affect the quality of the training too much.

Another drawback of using the Laser Shot training system is that it doesn’t work with magnified optics. Using a scope or magnifier of any kind simply makes the projected image larger, and therefore more blurry and grainier. Laser Shot does have a scope simulator, but that system is quite a bit more complex and is primarily targeted at military and law enforcement agencies.

Sight offset can also be a problem for precision shooting. Using an AR-style rifle with a red dot this error can be as large as three inches or more depending on the specific mount and optic used. Depending on what type of laser-equipped gun you are using the offset may be able to be corrected with a elevation adjustment. Firearms equipped with iron sights don’t exhibit this problem to the same degree.

The system isn’t cheap by any stretch. Prices for the Home Theater system start at around $1,000 for the HT-205 and range upwards to $5,999 for their top of the line system complete with camera, computer, projector, software, shotgun, rifle, and pistol. Various accessories are also available for an additional cost. That may sound like a lot of money, and it surely is, but considering the cost of ammunition these days such a setup could very quickly pay for itself.

Users of the base system are faced with some pretty specific computing and projector specifications that must be met in order to setup a functioning system. For the computer, 32-bit Windows OS, a 1.8 Ghz processor, 512 MB of RAM, and 1 GB of drive space are required. In addition, a second video card by NVIDIA with at least 512 MB of RAM must be added to the motherboard. Integral video cards and cards of another brand will not work. This is not an insignificant hurdle for a shooter who is not technologically minded. The alternative is to upgrade to a more expensive model that includes the computer and projector.

The Verdict
There is really no replacement for actual trigger time using live ammunition when it comes to training, but the Laser Shot Home Theater system comes very close.

Studies have shown that laser-based training on systems such as these are just as effective as training with live ammunition. After using the system, I have to agree.

This segment of the firearms training industry has come a long way in a short period of time, both in terms of technological advancements and in price reduction. When compared to the cost of running through thousands of rounds of ammunition every year, the Laser Shot Home Theater is well worth the cost. If you’re looking to get the most training for your dollar, it’s hard to argue that live fire is still the best bet. Sure, you’ll still have to hit the range from time to time to stay fresh, but when winter winds blow and spring rains turn the range to mush, choosing to spend an hour or so on your own private range inside your own home is pretty easy decision to make.

This article was originally published in GunUp the Magazine.

Training
Training
EDC or Every Day Carry: All you have is what’s in your pockets
Preparedness, the NRA, and You

Leave a Reply to A Citizen Cancel reply